In this video, you will see a tutorial showing how Blue Sky Evolution’s Orbital product integrates with PipelineML. You will discover how to export a PipelineML file out of the Orbital system.

This tutorial will help you install and use the PipelineML GeoPackager.

PipelineML GeoPackager is a QGIS plugin that reads a PipelineML file and translates its contents into a GeoPackage. This allows QGIS to natively consume and store PipelineML data for GIS analysis, and demonstrates the ability for PipelineML to be implemented in a fully open architecture. It is free, open-source software (FOSS), distributed under the GNU General Public License.

PipelineML GeoPackager is implemented as a processing plugin with an algorithm provider, so it can be run within the components of the QGIS processing framework (such as the graphical modeler or the batch processing interface) and thus integrated into more complex workflows. It requires QGIS version 3.0 (or higher). 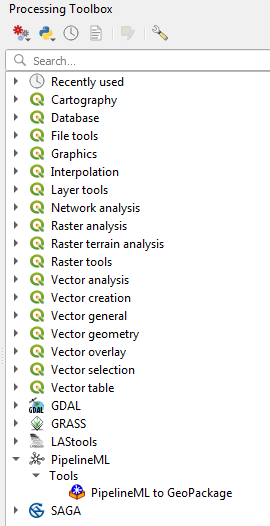 The easiest way to install PipelineML GeoPackager is directly from the Plugin Manager dialog (within the QGIS application). For detailed instructions on how to do this, see QGIS Training Manual > Installing New Plugins. Alternatively, it can be downloaded in zipped format from the QGIS plugin repository and then installed using the Install from ZIP tab on the Plugin Manager dialog.

When the plugin is loaded, the provider PipelineML should appear in the Processing Toolbox, with an algorithm called PipelineML to GeoPackage. (The algorithm ID for Python scripting is pml:pml2gpkg.)

To execute the algorithm, double-click PipelineML to GeoPackage in the toolbox. The following dialog should appear.

The browse buttons can be used to help populate the parameters, which are explained in the table below.

Once the parameters are populated, click Run. The dialog should switch to the Log tab, which indicates progress as the algorithm executes.

When the algorithm is finished, the resulting layers in the GeoPackage are added to the current project in QGIS.

PipelineML GeoPackager is written in Python using the GDAL (Geospatial Data Abstraction Library) API that ships with QGIS. Source code is hosted on GitHub, where you can report bugs, request enhancements, or otherwise become involved.